Privateer press are well know for planning ahead with their releases - you can often see their planning for the future in the theme lists.

(Small thing, I started writing this back in mk2 then when mk3 was released put it to one side...) 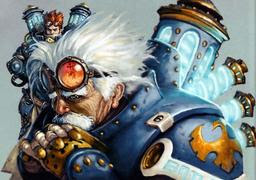 The Stormblade Captain is a great example of this, before it was released the only "Storm knight solo" was Laddermore and there wasn't a "Stormblade solo". Both of these are types of solos allowed in various tier lists.

I stated by looking through the mk2 tier lists for hinted future releases here is what I found and ideas from what they could be...

Ranger solos - Kraye & Magnus mk2 themes
No models that fit this yet but I think it would be a good way to add a solo that hands out pathfinder in faction. If it is not a character that would be even better!

Light cav solos - Kraye mk2 theme
Currently another empty choice, not sure how this could be used or what role a light cav solo could have in Cygnar. (The light cav rule doesn't even exist anymore!)  Perhaps a Character Tempest Blazer that buffs them much like Laddermore does for Storm Lances?

Morrowan units - Blaize mk2 theme
Other tier lists name Precursor Knights individually so it could be assumed that there will be another unit at some point. Hopefully a multi wound medium base unit, or maybe a cavalry unit?

Morrowan solos - Blaize mk2 theme
Currently only Harlan Versh fits in this category it would be good to see a Morrowan priest/cleric style solo that could prevent friendly model's souls going to enemy models in it's command area. It could also have a medic aura and grant tough as a Action.

Sword Knight solo - Magnus mk2 theme
I'm not sure what could be done with a Sword knight solo, my thoughts first went to Runewood but he is not typed as a sword knight. There are not many buffs that I can think of that Sword knights could be given that don't already exist in the faction. This makes me think a combat solo might be likely in that role.
It would be cool to see a "Sword knight veteran" With jack marshal and a rule allowing it to bring Talon merc jacks into a cygnar army making them Friendly faction so Sword knights can use them to enable Flank.

Now that the first three Cygnar theme lists are out we can look to them to see if any other hints are given. 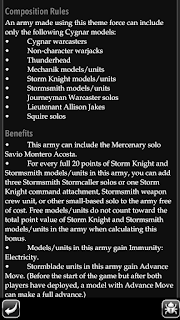 The Storm division theme doesn't offer any real hints for new models sadly, but this is a theme within Cygnar that is really fleshed out so its not overly surprising. 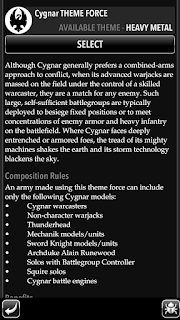 The Heavy metal theme. Notice how it mentions "Sword knight models/units". Another link to the clue above that there might be a Sword Knight solo in the future or perhaps even another unit? 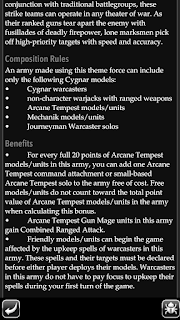 Sons of the Tempest them has a small clue to give, it states "small based Arcane Tempest solo" which hints towards a medium or large based one in the future. This could be the light cav solo mentioned above, so perhaps a character Blazer solo or Dragoon.

What do you think the future releases could be?
I'd love to know your thoughts on the subject. 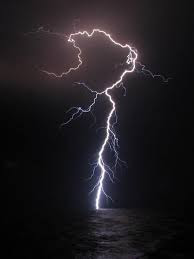 (a lightning question mark to inspire...)
Posted by LuckGod at 16:10 4 comments:

Email ThisBlogThis!Share to TwitterShare to FacebookShare to Pinterest
Labels: Cygnar 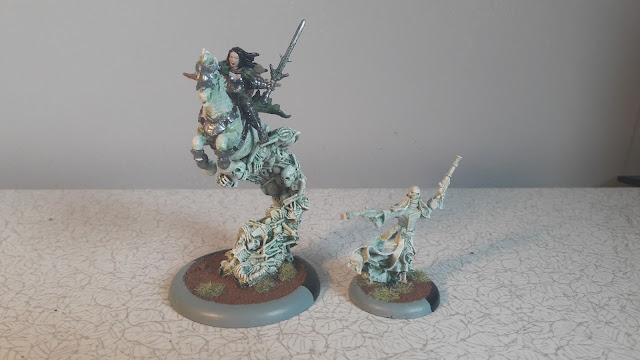 Alexia2 Is done! I had been putting off painting her for a while as she intimidated me as a painting project and I was trying to get 100% done with my Cygnar (which now is done so I can move on to some mercs) 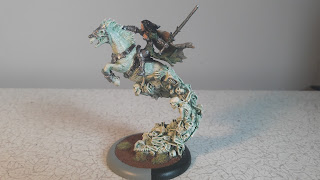 Ever since I saw someones conversion of this model I knew I wanted to do the same.
I can't tell you who was the first to convert Alexia like this but I salute them!
She looks so cool like this to me, though she is a pain to fit in the case now...
I used bones from the "Skull and bones sheet" that Toad King castings make you can find them here 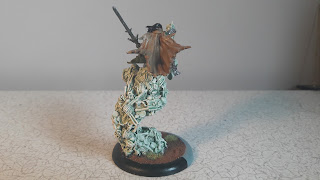 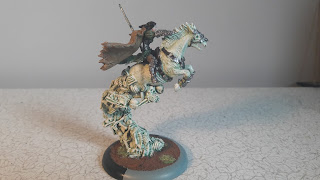 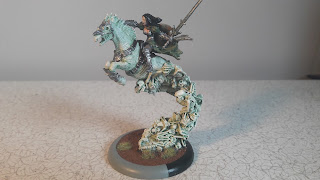 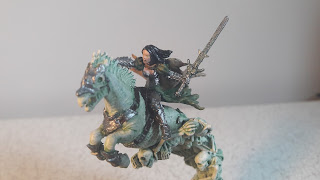 She was an interesting challenge to convert and a joy to paint in the end. I look forward to putting her on the table! 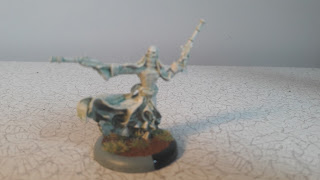 I obtained a pistol wraith in a trade last year and decided to keep it rather than sell it on, it will make a good "bad guy" for the Iron kingdoms RPG which I GM
I painted him as well just to save a little time. 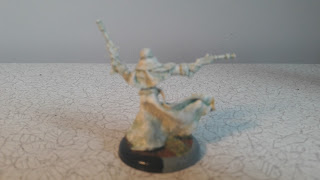 What do you think of my Alexia2 then?

As with all my conversions if you would like to commision me to make one for you please send me an email to
thomasgbell84@googlemail.com
(I'm based in the UK) 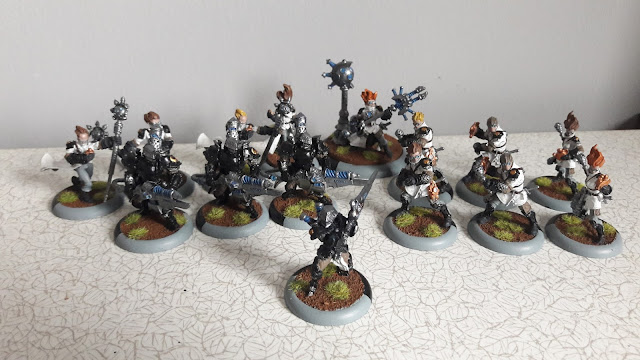 So with this lot painted I am 100% painted for the whole Cygnar faction! (There are new releases due to come out in March so it won't be for long!) 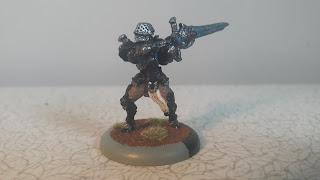 I took a long time to pick up Maddox as I owned more than enough of the Jacks that come in the battle box, but when one of my friends picked up the two player set to get the Cryx I went in with him on it. Sold a few of the Cygnar items I didn't want and will be converting the Lancer and Ironclad into a Talon and Nomad respectively. 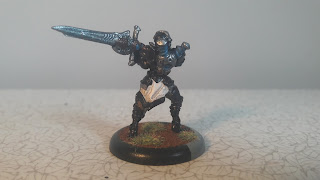 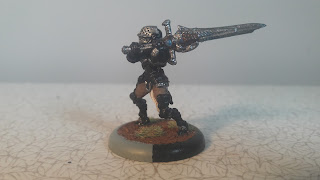 I replaced her head with a Storm knight helmet just like I did for Stryker 2&3 I think this helps her fit in better and made it so I didn't have to paint the less detailed face... 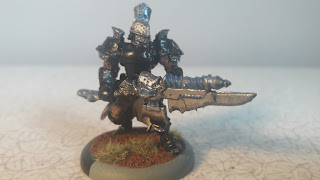 I managed to pick up three Stormblade weapon attachments to round out my two units. They are now both at max strength! 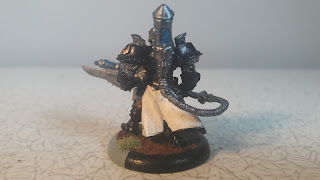 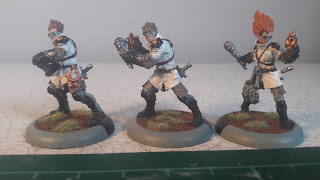 Stormsmith grenadiers! Love the models for these guys and am looking forward to using them, not sure exactly how well they will do but it will be interesting to try. 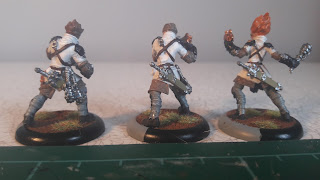 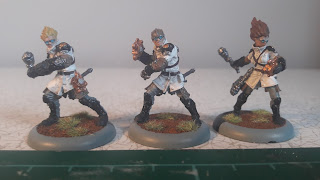 Second unit of them too, I tried to vary the poses and pick different hair colours to make them look less like clones. 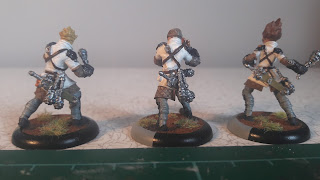 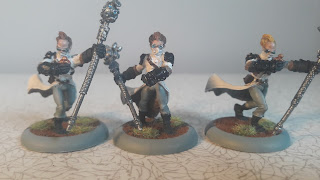 Anyone who has read my blog for a while will know that I like to paint in batches... So I picked up three more Stormsmith stormcallers to get me to max FA and paint at the same time as the grenadiers.
I did change my colour scheme for them a little, I painted their armour pieces black instead of silver.
I might go back and change the old ones to match this, what do you think? 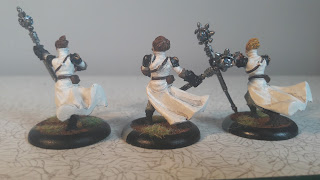 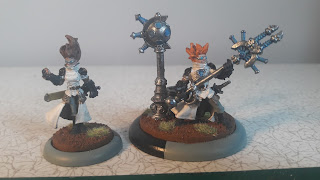 And to round it out I picked up a second storm tower! This was second hand as well and already assembled, I didn't want to take it apart but it was quite forward on the base leaving a big empty space so I put a barrel on there for some added detail. 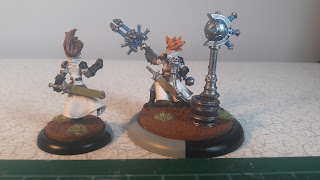 So what do you think of this lot?
I will be doing a full army post with loads of pictures soon, but I will have to take them all to my gaming club as I don't have a surface large enough to set them all up on at home!