Guilders Wrath: Week one, The Shambler

The Shambler turned up to attack my Slag territory, not a huge deal if it drains it and turns into old ruins.
But I wanted to see if I could take it down.
The shambler starts in the middle of the board with different sorts of plants set up around it. (The paper areas mark plant life) 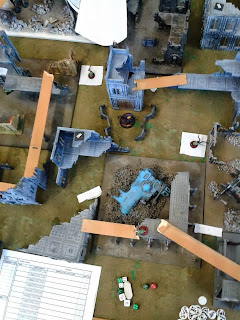 I set up with a firebase covering the tree, and another group to head over to deal with simons gang who had turned up to exploit my misfortune. 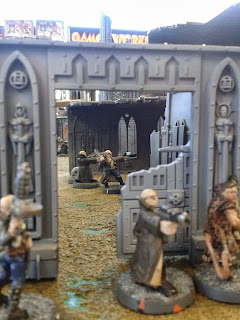 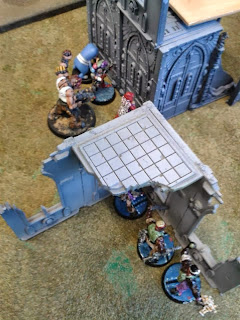 My firebase I used to take on the tree, the heavy plasma ran out of ammo very early, so I hid the heavy for the rest of the game (Still no back up weapons...) So it was left to the juves and heavy with flamer to deal with the tree 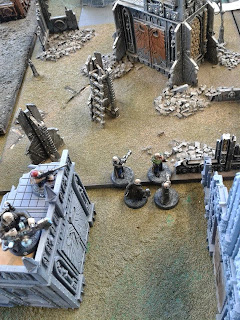 My team led by my leader got attacked by a brain leaf plant. Don't under estimate them! They took down the ratskin scout, and two of my gang before my leader killed it. I got really unlucky and all three got taken over and went onto attack simons gang and all went out of action.

The juves and flamer heavy over time reduced the tree to 2 wounds and set it on fire. It started heading off the board and just before it managed to get away, the brand new juve (who was armed with simons stubgun from the failed rescue) scored his second wound on the tree killing it! This also awarded 15 exp for taking it down.

The game then became a fight between Simon and myself, which was very bloody until I realised there was little to be gained staying and bottled giving him a underdog bonus of 3 per guy and 15 credits for winning.

Events of note after the tree died? My ratling sniper failing to hit his heavy with missile launcher out in the open twice in a row...

Simons gang leader charged my ganger and failed to wound so I charged in all the guys I had in range, including the juve who killed the shambler. Who I sent in first and he won! so he took down a gang leader a tree and a cretin in the same game earning 41 exp! 6 levels in one game a personal record. Arden got the nickname green fingers and a new model will be painted up for him.

We both took quite a few injuries from this game, a couple of my juves have really become liabilities and will be purely meat shields from now on...