Necromunda Guilders Wrath: Prologue (An Introduction to Our New Campaign)

Anton walked into the Winking Millisaur, the roughest dive bar in sector 6Quebec, his newest juve in tow. He'd rather not have this youth with him right now but the lad needed toughening up - and a trip to the local would let Anton see what he was made of. Running his fingers over the scar on his neck Anton felt the stubble of three days growth and resigned himself to the fact that he would have to fork out for a new razor eventually. He stared around the bar, checking out the men who drank in seats scattered throughout the room. His gaze was caught by that of a man he knew too well that sat in the corner of one of the booths, and he was waved over by his long time friend and part time enemy Orris.
"Grab a pew you old dog, before you fall down. I have some news for you."
Walking to the booth Anton embraced Orris in a massive bear-hug, and laughed as he sat down metal bench. He turned to his young companion. "Masslor go an' fetch me a bottle of wild snake to share with my old friend here. And get yourself a glass of second best while you're at it." He tossed some credits at the boy, who keenly scurried away leaving the older men to chat.
"Whats so important you had me come all the way down here then?" Anton asked impatiently.
"Calm down Anton you old Scaly, its worth your while. Trust me," Orris replied whilst shiftily checking the crowd for eavesdroppers. "You know that Hive quake a few weeks back?"
"Of course," Anton replied. "It's been a nightmare - power outages, vent problems. No-one knows what's going on."
"Yeah well I heard from my guy up Hive and he said it was a ship. Crashed right into spire 5 of the Northern cluster," Orris replied.
"I heard it was a cultist bombing, and the Guilders are covering it up..." Masslor - keen as possible to be involved in the conversation had rushed back with the drinks, almost tripping over his own feet and spilling Anton's drink down his long-coat.
"Yeah? Well I heard it was a Nid spore! Don't listen to any old rumour you hear at the rat-shoots." Anton quickly dismissed the kid, and smiled at Orris who shrugged - as if to say 'youth!'.
"Anyway - there's work to be had. Not sure what it involves, but it pays well I hear. They're gathering as many able-bodied men as they can. I thought I'd let you know - I heard things had been rough for you lately."
Anton sighed. "You don't know the half of it." His crew had recently run in to a horde of Scavvies - he had lost nearly half his guys to the filthy mutants. One of the reasons he was having to take on inexperienced punks like Masslor. He took a swig from his drink. "Alright," he said. "Let me know where the meet is. If my guys don't some work soon I might as well give up the whole damn game and start digging my own grave."
"Oh-eight-hundred. Be at transport hub seven. And bring your overnight bag - I hear it'll be a long job."
"Sure thing. Look, thanks for the tip Orr - I owe you! In fact, finish the bottle. I have to go gather the lads."
As Anton walked out of the bar with the juve in tow, the kid frantically asking a thousand hurried questions, Orris chuckled to himself. Right, he thought. Off to the next bar to find another chump. 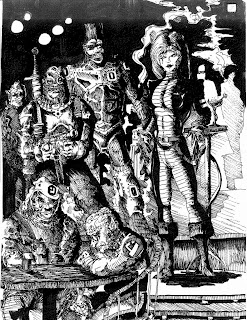 Email ThisBlogThis!Share to TwitterShare to FacebookShare to Pinterest
Labels: Necromunda