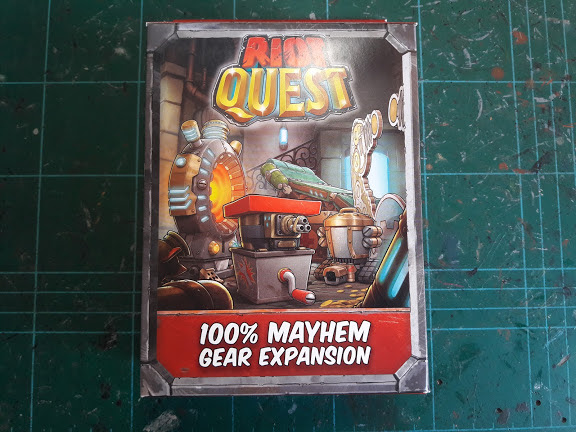 Today we take a look at the Mayhem Gear Expansion for Riot Quest.
Unlike ever other Riot Quest release this one has no application in Warmachine and Hordes, though you could use various models as Objectives of flags if put onto bases of the appropriate size.
The set contains 6 models, 5 of which are resin and one is metal. There is also a folded gloss sheet of paper with the Gear rules and a set of Stat cards to use the different gear in game. 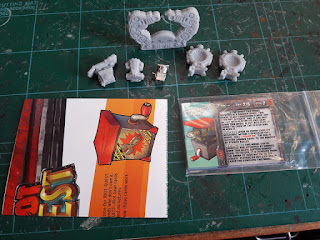 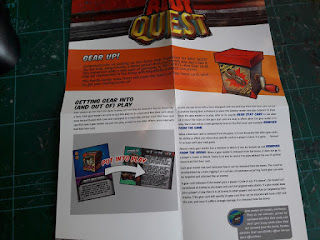 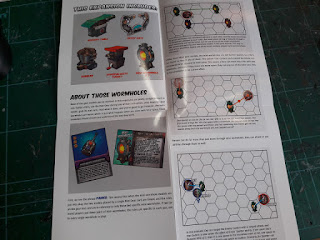 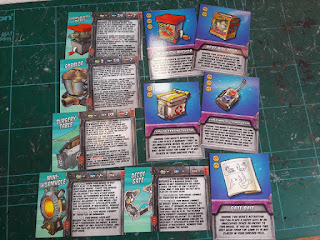 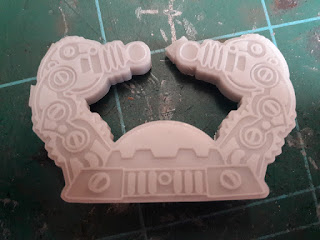 The fake gate is really nicely sculpted and all the resin injection ports are on side surfaces which can be cut off and filed flat with no risk to detail which is great. 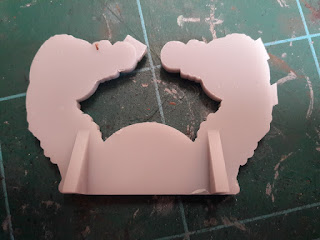 I love the right angle supports at the back half. I have seen a couple of people paint this in interesting ways such as the back half and edges being corrugated cardboard and another person did woodgrain. I'm not sure how I will end up painting it. 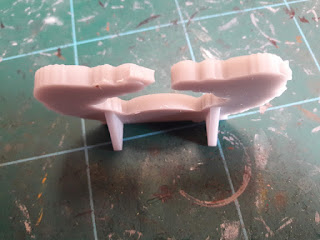 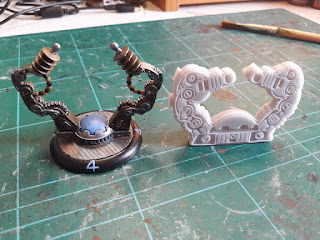 The dimensions and positioning is slightly different compared to the normal Spawn gate, but I think that's fine as its a false approximation rather than a one for one replication. 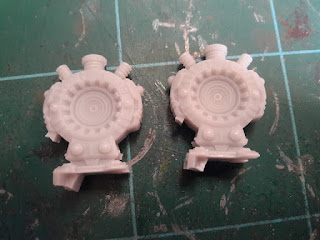 The portals are really neat looking, loads of techno looking parts all over them. They will be great for people who like doing source lighting (I'm not great at it myself though...)
I will likely be painting one orange and the other blue... if you know - you know... 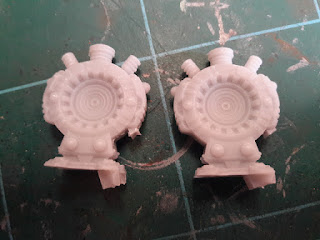 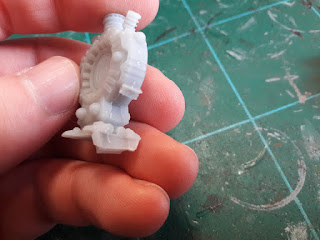 Resin injection ports on these are on the bottom and side, as is typical lately they are well placed and easy to clean up.
It is slightly smaller than I expected, but as its not a "model" in game it needs to be able to share a space with a hero sometimes so it makes sense. 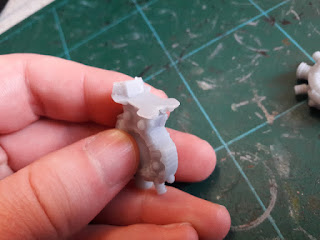 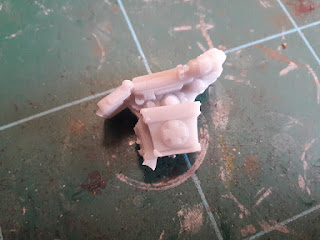 The surgery table is nicely detailed and injection ports are placed well. It has a mould line running straight across it, but is luckily not a bad one so was easy enough to remove. 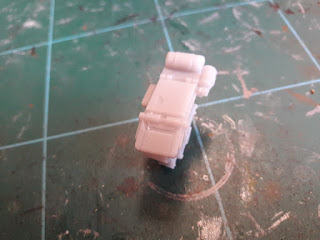 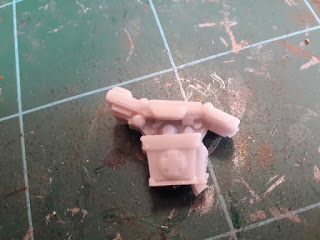 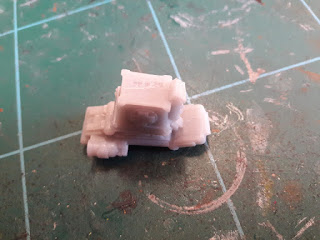 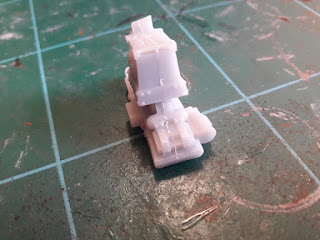 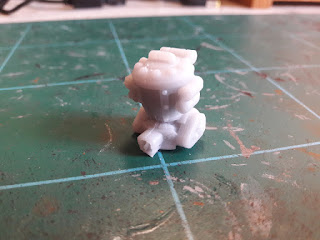 This little guy is called a Gobbler and its a loot roomba sorta thing! It looks goofy in an awesome way I'm looking forward to painting it! 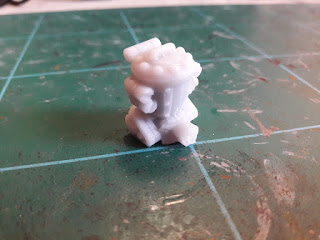 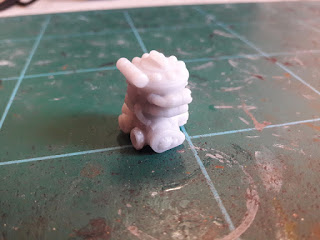 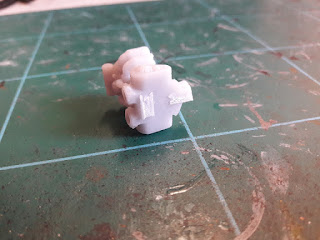 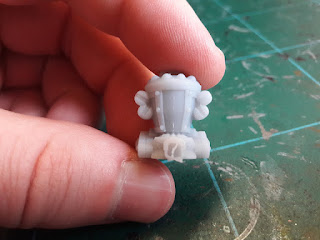 Slight mould line across the model, including inside the vacuum area which was a bit tricky to clean. 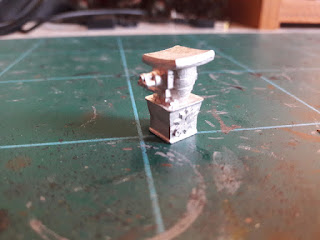 The metal Hypervelocity turret is like a jack-in-the-box looking gun turret. Very on brand for Riot Quest. 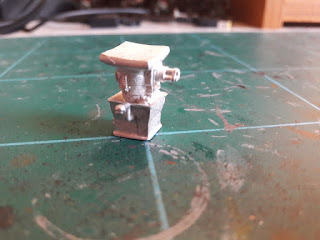 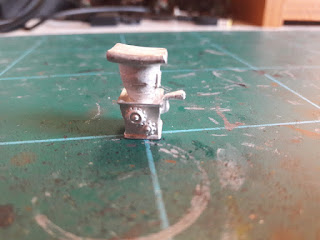 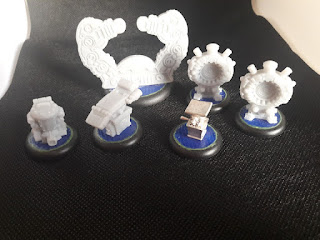 I decided to base them all and give them the same metal plate basing that I used for the Spawn gates.
I think overall they are really nice models and great gear options I'm looking forward to the crazy antics I will get up to with them!

They are a bit expensive for what you get so I can't recommend them as an auto buy at all!
I do wonder how another player who doesn't own them will feel about them given the cool rules they give you access to as they aren't easy to "share" like the treasure or gate expansions.

If you want to pick them up for yourself you can find them here at The Outpost (a UK webstore I'm affiliated with)
If you want to support my content consider taking a look at my Patreon which you can find here. I don't put any content behind a paywall but I do offer rewards to people who support me in ways like getting to vote on what content I work on in the future or outright just picking the next subject of an article.
See you all next time!