When I first saw the size of the Archons I knew that they would be tricky to transport and might cause placement issues during games. I loath to take my models off the table and replace them with proxy markers so being able to remove a weapon and keep them on the table is a great option for me.

The Morrowan Archon is first up as was the first one I got and the model I figured this all out with. 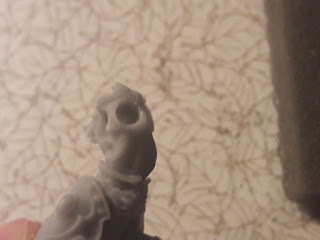 When drilling into the shoulder I first put a small nick using a hobby knife in the middle of the hole the model already had for the spear arms original plug. I then drilled into that nick using a 1mm drill bit. This was to help guide the larger drill bit (3mm) I then used to make the hole for the magnet.

Every few seconds I would test the depth of the hole I had drilled with the magnet. I didn't want to drill too far into the model as I knew I needed room for the magnet which would be in the back for the wings. 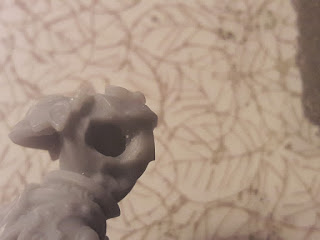 I repeated this process on the back in the hole meant for the wings to fit into. I tested the depth of the hole I was drilling regularly to make sure I didn't end up drilling straight through the front of the model. I wanted to make sure I had enough room for one or two magnets inside the torso as adding an extra magnet really makes a firmer hold for the wings later on. 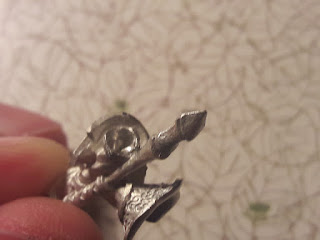 For the spear arm, first I clipped off the peg that normally fits into the hole in the body. I then repeated the same method used on the body. Nick a small hole in the centre of the attachment point, drill a guide hole using a 1mm drill bit, then drill using the 3 mm drill bit.

I really took my time with this, as it is a lot harder drilling into metal compared to the resin, and pushing too hard could lead to drilling through the side of the arm. 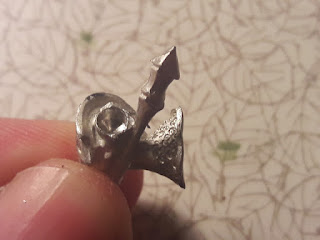 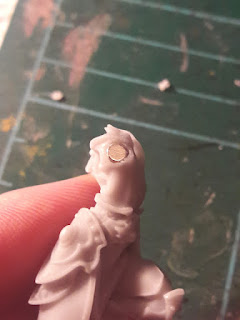 I glued on magnet into the body, then the corresponding magnet in the spear arm. Before gluing - check the polarity of the magnet, then check it again! You really don't want to have to ruin your model digging a magnet out of the model. 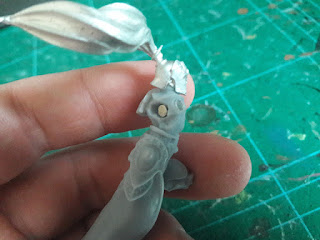 With two magnets being so close to each other in the body there is potential for them to repulse each other. They are nearly at right angles to each other so there is no easy way to know which way round to put the magnet in the back. My advice is to dry fit with no glue both ways to see which one "feels" like it seats easier. 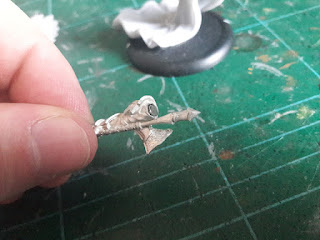 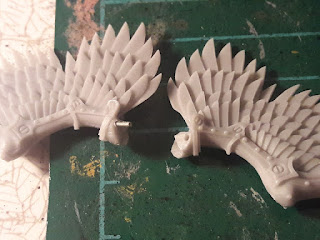 The wings themselves are a lot trickier...
I cut into the joining parts of the wings to make "L" shapes to create an area to fit the magnet between them. I struggled to keep the wings lined up neatly while the glue dried however.
So I drilled a 1mm hole into each as you can see above to pin them together to make this process easier. 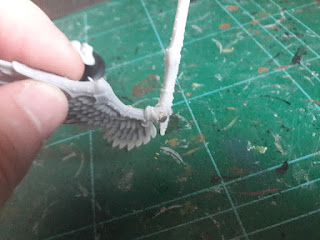 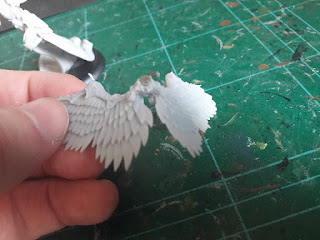 If when you attach your wings to the body you can still see the magnet you can use green stuff to cover this up and allow you to paint over it easily. (I had to do this on one of my Morrowan Archons)


The Thamarite Archon wings are actually a lot easier. They have a small bump and dent in each wing to help glue them together. I glued them, waiting until the glue was fully dry then drilled into the join with first the 1mm drill then the 3mm. This was far easier and quicker. 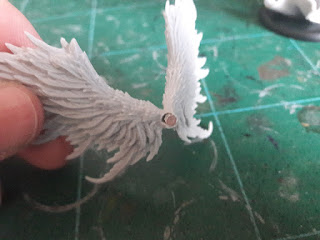 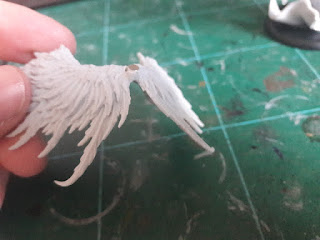 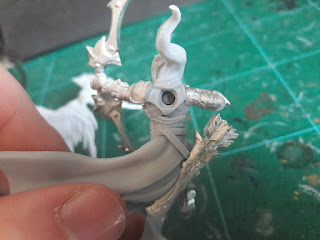 Drilling into the body was exactly the same process as with the Morrowan. 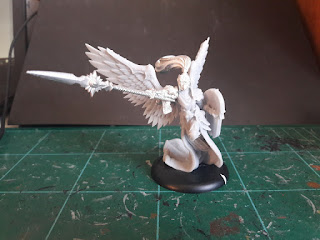 Here are my magnetised Archons! 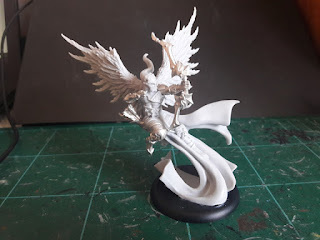 I hope you found this guide helpful, if you did or have any feedback for me, please let me know as I appreciate hearing from you all.

If you like the content I make consider supporting me on Patreon you can find the link here. It also gives you the ability to shape where my content goes in the future.